ConstraintLayout, Inside and Out: Part 2

Note: ConstraintLayout and the layout editor tools are currently in preview. The information in this post is based on the code and behavior of constraint-layout:1.0.0-alpha4. These behaviors may change as the tools approach final release.

In the last post, we spent some time exploring the various constraints that are available for use with ConstraintLayout. Now let's dive deeper into the mechanics of this flexible new tool, starting with how the code is organized internally.

Where Do You Put It All?

Each LayoutParams instance contains another component called the ConstraintWidget, which contains the logic to process and analyze the constraints. Each ConstraintWidget is connected back to a parent ConstraintWidgetContainer, forming a relationship similar to that between a parent ViewGroup and the child views.

The ConstraintWidget holds all the relevant information about the view's position and size as it is computed from the constraints. It becomes the source of truth for measurement and layout data when needed by the framework rather than the LayoutParams.

During layout, each ConstraintWidget is filled with the constraint information from LayoutParams. The widget defines a ConstraintAnchor for each "connectable" point (left, right, top, bottom, baseline, center), and these anchors are attached together to form a simple graph of the constraints applied to each view.

If you want to better understand any ViewGroup, a great place to start is analyzing the onMeasure() and onLayout() methods within it. For the uninitiated, these are the methods on any view that describe the size and position of that view and its children (in the case of ViewGroup).

A quick tour through the onMeasure() of ConstraintLayout reveals the following high-level process:

Tip: Having any size views in the container automatically adds a second pass through the measure process (or most of it, anyway).

From the last post, you may remember that views inside a ConstraintLayout have unique measurement characteristics — match_parent doesn't work and we can set a dimension to 0dp to cause it to be any size. Have a look at the following snippet from ConstraintLayout measurement:

For measurement purposes, any size is equivalent to wrap_content and other values (such as match_parent) would be passed through un-checked. These measurements don't take into account any constraints, so a match_parent view would generally just set its dimension to equal that of the parent container. Keep that in mind for just a moment.

I said before that size-dependent (i.e. any size) views are measure again after constraints are applied. The second measure pass looks something like this:

The second time around, which happens after the constraints are applied, any size views are re-measured to be exactly the width or height that the constraints system computed. The same process does not happen for a view marked as match_parent. This is important because many views rely on measurements to compute content placement. Gravity on a Button or TextView, for example, aligns the text based on the view's measured size, not its actual layout position.

So why doesn't match_parent work in ConstraintLayout? Because the view bounds are computed against the applied constraints, but the view measurement does not account for the same constraints. This leads to odd behaviors in view content placement at runtime.

As noted in the steps above, the view bounds (left, right, top, bottom) for each ConstraintLayout child are derived from analyzing the overall system of constraints. The top-level ConstraintWidgetContainer initiates its own "layout" pass where the widgets are traversed and their constraints evaluated to determine the view sizes and positions as a system of linear equations. After the system solution is computed (more on this below), each ConstraintWidget is updated with the proper bounds for its attached child view.

The process during onLayout() then turns out to be quite simple, as ConstraintLayout needs only to iterate over its children and set their bounds values. Something akin to the following:

ConstraintLayout distills the constraints applied by views down to a system of linear equations that it can solve at runtime to determine the positions of each anchor point. This, in turn, defines the bounds of the corresponding view.

During onMeasure(), each anchor point becomes a system variable, and each constraint is converted into an equation to describe how the attached variables relate to each other. Once the system of equations is built, ConstraintLayout implements a solver using the Cassowary algorithm to compute the values of each variable.

First, constraints are added for the sizing of the parent container. Next, each ConstraintWidget is given a chance to add its own constraints until we end up with one large "table" of equations for the solver to attack. As each constraint is added, related equations are connected and simplified wherever possible. This reduces the amount of work to minimize the system later on.

Linear systems are typically comprised of a single linear function (meaning no exponents) that can have multiple solutions — often called the object function or goal. A system of additional equations, or constraints is provided to determine boundary conditions that reduce the number of possible solutions to the goal.

However, constraints alone often do not reduce the goal possibilities down to a single solution. Common practice is to minimize or maximize the goal, meaning that the solution we seek is one that provides the largest or smallest possible value for the goal function.

To illustrate what the equations look like in more detail, let's look at an example...

Think of an XML layout where the Button is centered on both axes in the parent container: 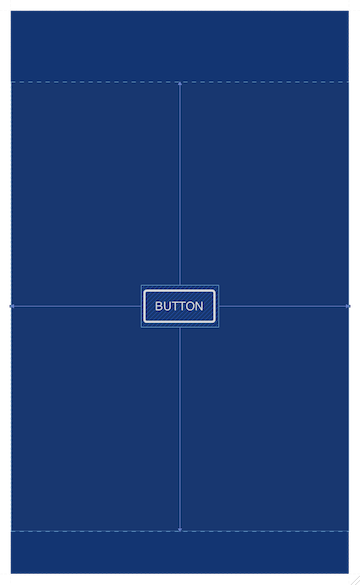 This layout produces the following set of 16 constraint equations for the solver to determine the bounds (L/R/T/B) of parent and child:
(h = height, w = width, m = margin)

These four equations are defined by the parent ConstraintWidgetContainer. The parent constraints are fairly straightforward, and essentially just define the boundaries that will be used for the others. X and Y are always zero (since measurements are parent-relative).

These come from the vertical centering constraints. Notice they are similar to the group above, but for the top and bottom bounds instead.

There is no doubt that ConstraintLayout is a complex piece of code, and we've only uncovered a small portion of how it works and what it can do. However, despite its complexity, I hope you now have a better understanding of what constraints are and how they get evaluated.

I would encourage you to step through the code of a simple layout and identify the linear equations it produces. See if you can solve them yourself and come up with the same result as the tools! Then, perhaps ConstraintLayout will feel a bit less like magic and more like a tool that you can wield with confidence.

The Future of Containers

Think about this in terms of the ultimate goal of flattening your layout hierarchy. What if you could nest layout behaviors without actually nesting the views themselves? What if we could create specialized containers implementing features that mirror LinearLayout or GridLayout, and apply those rules to a subset of the children inside ConstraintLayout? Nesting behaviors without incurring the measurement/layout expense of nesting views themselves would be a very powerful concept indeed! All we would need would be an API hook into the widget used to group certain child views.

I'm probably wrong. You should probably just ignore me. But what if I'm right?